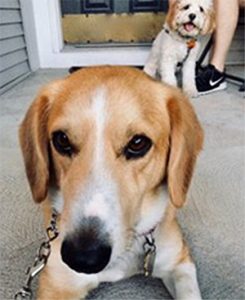 Some time ago, a new boy came to the neighborhood and Louie was not happy. Life was going along just fine for Louie. Everybody loved him and he thoroughly enjoyed greeting neighbors. Then Mac came along—five pounds of white fluff and super power energy. Everyone thought he was adorable… except Lou.

At first, Louie was okay with the idea of a new dog in town. He was intrigued as he checked Mac out via the smells he left in his owner’s front yard. Then Lou saw him from a distance, and things seemed okay. But when they met face to face, Lou immediately ran the other way. Mac had a little too much energy and in-your-face action. Mac’s mom and I gave them time to warm up to each other, then Lou gave Mac a quick snarl as a warning and was ready to go home.

Do You Appreciate What Others Bring to the Team?

Oh, the dreadful feeling of envy that slithers almost unnoticeably into our hearts. We’ve all experienced it. It usually creeps in with its pal comparison and causes resentment of what we perceive as someone else’s advantage—in Louie’s case, it was the serious cuteness of another pup, resulting in lots of attention from everyone.

I thought of this in regard to leadership. Many times, leaders will say, “Surround yourself with those who are smarter than you.” What is not part of that quote is to be sure and check your ego. Many leaders say they are looking for others who can be a great addition to their teams, but then squelch any opportunity for the new person to actually use their skills for fear it may outshine them. Those leaders will find acceptable ways of expressing their dissatisfaction by using the big “but” approach, i.e., “He may be a good sales person BUT he doesn’t do presentations well.”

I once read a story* of two men, both of whom were seriously ill and occupied the same small hospital room. One man was allowed to sit up for an hour each afternoon while the other man had to spend his time flat on his back.

Each afternoon the man who could sit up was by a window and would describe to his roommate all the things he could see outside. The man in the other bed lived for those one-hour periods when his world came alive because of his roommate’s descriptions.

That is, until envy slithered in: The man who laid flat thought, “Why should he see everything outside while I never get to see anything?” Late one night as he lay staring at the ceiling, the man by the window began to cough, choking on the fluid in his lungs. The other man waited. Soon, there was only deadly silence. As soon as it seemed appropriate after the man’s body was taken from the room, the other man asked if he could be moved next to the window. The nurse was happy to make the switch. Slowly, he propped himself up on one elbow to take his first look. As he strained to look out the window beside the bed, he found it faced only a blank wall.

Envy or Humility — It’s Your Choice

Envy is deadly and more pervasive in leadership than we think. If we as leaders are not careful, we can allow envy to kill spirits and damage our team’s morale. We may need to reflect upon these questions each day:

As a writer, I compare myself each day to others. If I am doing this in order to grow—great! If I am doing it to try to prove myself, I’ve stepped over the line and need to get back on track.

As for Louie and Mac, they’ve become great friends—that is, until Mac steps on Louie’s driveway!