As we follow Joseph in Genesis we see him suffer many trials by the age of seventeen. He was hated by his brothers for being their father’s favorite son. His brothers conspired against him and sold him to the Midianites who then took him to Egypt to be sold as a slave. Once he was taken from his homeland and dragged to Egypt, he was sold to Pharaoh’s captain of the guard. While Joseph attended Potiphar’s land he was entrusted with his entire estate. He was such a good attendant that we actually see Potiphar charging Joseph with everything he owns and trusting him implicitly.

I’d like to take a minute to pause here and consider what this means. A man that has been taken from his home, his family, heritage, comfort and who brings nothing with him, is sold to a man of wealth, status, and connection. Are we such diligent workers that we are entrusted with more opportunities the longer we are working for someone? I know it is so easy to get lost in the day to day grind. The darkness that we feel in our work environments and brokenness we witness by our co-workers. However, this passage shows us that two completely different people in every way from their upbringing to their religion can still work hand in hand.

Next, we see Potiphar’s wife make a play at Joseph. She taunts him for weeks, maybe longer, trying to lure him into have an affair with her. Joseph faithfully refuses her propositions. Finally, she gets a window to be alone with Joseph one day while Potiphar and all his servants are away and when Joseph realizes what she is orchestrating he runs out of the house.

Joseph ran out of the house when he saw how close his temptation was. Have you ever struggled with temptation at close range for an extended time? The fact that Joseph RAN out of the house is so convicting and encouraging to me. Perhaps at that moment, he felt like giving in to her advances? Maybe he considered taking her up on it? It could be that he already thought he would lose his job if he ran away? Regardless of what went through his mind, he still RAN. Maybe there is something in your life that is enticing you? Perhaps there is a co-worker, a promotion, constant gossip, maybe it isn’t something animate but something you know you can’t claim as yours? We see in this verse that we are given the freedom and wisdom to RUN. Whatever that may look like to you.

Once Potiphar’s wife claims that Joseph slept with her, he places him in prison. While he is in the king’s prison the prison guard notices Joseph and his trustworthiness and hard-work. Again we see Joseph given opportunities, and responsibility while he was there.

I don’t know about you, but if I was placed in a prison, I would not have the motivation to work very diligently for my captures. How hard must it have been for him to lay night after night knowing he was imprisoned wrongfully? Yet, he still respected the warden and the prison enough to do a job well-done.

Perhaps you are in a position that is challenging, dark, oppressive or even feeling like you are in a waiting period. I think our circumstances can be very demanding but we can decide whether or not we will give of ourselves even when it’s hard. If we truly do that, we will look different in our jobs and open up doors to talk about WHY it is that we look different.

Monday: 1.) Is there anything in your current work life that is tempting you that you know you shouldn’t be indulging? What would RUNNING look like to you in this situation?

Tuesday:  2.) Have you ever had something said or claimed about you that isn’t true? How did you respond? Was it hard for you to forgive, move on, or cope? What would it look like to redeem that?

Wednesday:  3.) Have you ever felt scrutinized or hated by someone you work with? How can you choose to love them? How can you speak life into them? Is there any way you could resolve any issues with them?

Thursday:  4.) What are some ways you have grown in your current position? How are ways you could increase productivity in it? Are you choosing to respect your leaders even if they aren’t respecting you?

Friday: 5.) Have you ever felt completely out of your element? A new country/position/role? How could you transition into those new seasons while also trusting God that he will guide you through those times? 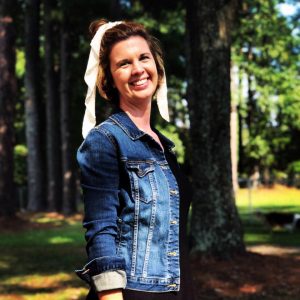 Jules grew up in Central Kentucky and felt called to Sign Language Interpreting at the age of 16. She worked for Boone County Schools for six years as an Educational Interpreter. Over the summer she resigned and currently is working in the Tri-State area as a Free-Lance Interpreter. Over the past year, she has been hired by 6 different agencies, both local and national, interpreted for a Celine Dion concert, interpreted on cruises, and passed two national interpreter exams.

Random fact: If I could be anything in the world, I would be a mermaid.