Sometimes when answering the call of God, life takes you in very unexpected directions. 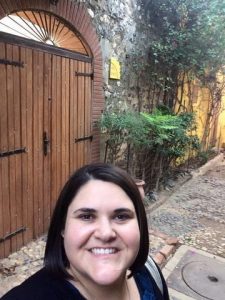 Such was the case for Bobbie Sparks, born and raised in west Texas, who found herself called to the mission field in Asia.
Bobbie says “I became a believer when I was 13, which radically shifted my perception of the world. I realized that it was really small. I became challenged to be active in sharing my faith and integrating my faith into what I was doing. In high school I felt called to mission work in Asia. I thought that was a crazy idea. I hadn’t seen an Asian person, but I knew that’s where I needed to go. I gave into that calling and God changed my heart and gave me a love for that people group. I knew I wanted to do education in some form. I had a heart for orphan work really because that’s all I had heard about. So in college I signed up to go on a trip to Asia. When we arrived, the orphanage was closed so we ended up teaching English, which was the worst thing that could happen to a math major. But I loved the relational aspect of it. I loved that I could take what I already could do and integrate my faith just by telling them who I was. I got an opportunity to teach underground pastors there. That led me to understand that I didn’t have enough knowledge to invest in anyone. So I pursued seminary with the idea that I would be going back. I wanted to give them something of substance.”

She continues, “I went back and jumped into a village as the only foreigner and started a school with some friends from there. I loved it. In 2012, I knew I was going to be moving back to the US for family and was approached by a school leader at the time. We had started a church within the school and were being shut down because of it. He knew that I had a background in online education and asked if I would consider starting an online program to teach English. I took advantage of that. We started with the student base that we had and just spread from there. Our teachers are believers. Our administration is believers. Through every lesson they hear, the students are given spiritual opportunities to hear the gospel.”

The school currently has 250 students ranging from age 4 to 77. The curriculum is tailored to who they are and what they are learning. There are some group experiences, but most are one on one.

Bobbie states, “That allows for deep relationships to be built. Our education philosophy is based on the fact that all learning comes from God. If we are to learn well, we follow His guidance in how we learn and who we are. So we start with the assumption that every student we have is a broken human being. We look at how can we take the broken pieces and how can we take the God pieces of them to inspire and empower them to learn based on how they learn individually. It’s very tailored to who they are individually. We believe that every person is created differently.”

She concludes, “Most often students come to Christ because they are happy in class. For the first time they feel like they matter. They are given a voice. And they are given somebody to really listen to them in a country where there are millions of people, and they get lost. They long for somebody to say ‘you matter’ and I care about how you learn, and I actually care about more than you memorizing words. We get the opportunities to love their hearts.”

Bobbie lives with her son Adriel in Northern Kentucky, although she will soon be moving to Texas to be closer to her extended family. She has earned a Bachelors degree, two Masters degrees and one Doctorate. She is a doctoral candidate in two additional fields of study. She speaks nine languages.