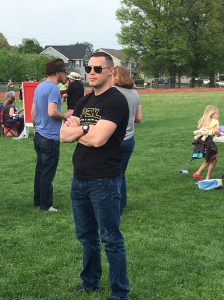 Brandon Meuse has used his role as a patrol officer on the overnight shift to bring the love of Christ to the streets. A few years after leaving the Army where he served in Iraq, Brandon joined the police force in Columbus, Ohio so he could serve in a similar capacity without leaving his family for extended periods of time.

Although he was raised in a Christian home, his true journey of faith began in a bookstore as he was researching the American Civil War. He says, “I was at Barnes and Noble looking at Civil War books and there was a book sitting on the shelf that wasn’t a Civil War book. It was Discipline equals Freedom by Jocko Willink, an ex-Navy SEAL. I took it home, and it has a lot of motivational stuff in it. He talks about how you’re the one who has to discipline yourself. If someone else is disciplining you then it’s not as productive as if you are the one taking charge. One of the things in there was ‘What is your end goal?’ My end goal is heaven. What are you doing to take steps to get there? Nothing. I have no idea. From when I was a kid I believed in Jesus but that did nothing to change my life. I was still the most selfish individual on earth. I was still holding my family ransom to what I wanted and, when they didn’t go with it, taking it out on them. From there I dove into The Word. I shut off the world, turned off the TV and was going after it. One of the first things I found was Jeremiah 29:13. It says: “You will seek me and you will find me when you search for me with all your heart”. Well that’s it. I’m digging into The Word to find out what He wants, and through that, He revealed Himself.”

Brandon continues, “When I was in the Word, He started speaking to me through visions, dreams, speaking into my heart, my thoughts. It occurred to me that I never asked, ‘What do you want me to do?’ It was always ‘What can You do for me? What’s the next blessing I can get?’ He said, ‘Nothing. Just be with me’. So it was communing with Him, thanking Him. He wanted me to begin praying for people, and I was like ‘Let’s do it.’ From that point on, if He says do it, I’m doing it. I ask, ‘Is it ok if I pray for you?’ If they say no, I say that’s ok, have an amazing day. That’s fine. Every night I’m praying for people.”

He says, “I enjoy praying for the ‘bad guys’. They aren’t really bad guys. They’re just deceived. Our war isn’t against flesh and blood but principalities and powers that are controlling people. We get called into situations where someone is caught doing something and they want to fight us. They want to struggle. They don’t want to go with the program. So we get them handcuffed and into the cruiser to cool off. Then I go in and talk to them. I say ‘Hey man, I’m sorry to meet you like this. You’re clearly going through something. Is it ok if I pray for you?’ I pray that the Holy Spirit would reach out, touch their hearts and give them some guidance. I pray health over their bodies. Just to show them the love of Christ. They say, ‘I was just trying to fight you and now you are praying for me’. They haven’t seen that kind of love. That’s what’s going to flip the world on its head.”

Whether it is answering a domestic disturbance call or helping to manage crowds during protests or any of the other situations police officers face on a daily basis, Brandon remembers that it is only in His arms, completely surrendered, that he is totally free. As he deals with people who are angry or hurting he says, “It doesn’t matter if they want to hurt me. I love them. I see them through my Father’s eyes; I see them for their created value, not for who the world molded them into.”

His message to Christians: “Please don’t be reduced to another Christian seeking how God can benefit YOU. Find out what Jesus instructed so the Holy Spirit can lead you to being completely in the arms of the Father at all times. Totally occupied. It’s His life through you. It’s peace, joy, and comfort 100% of the time, regardless of circumstances. You will be immovable!”
Brandon lives with his wife, Sarah, and their two children in Columbus, Ohio. He has witnessed physical healings, restored marriages, and renewed hope as he has been faithful to his call to pray for others in the workplace.