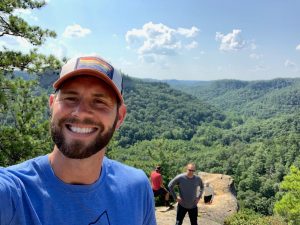 The idea for Roots Staffing began far away from Cincinnati in the country of Kenya. Brett Ralston and his wife Trishia were part of a non-profit, Vapor Ministries, where they were assigned to Kenya to construct a new sports center.

Brett says, “We were asked to go and build a sports facility in the slums of Kenya. I had no construction experience, so this is part of my testimony that I love sharing. Only due to the ignorance of the president were we sent there! We physically constructed an Olympic size running track and a level soccer field which is super hard. But God brought the right people around us, and He connected us to the right contractors and sub-contractors. We hired a lot of people from the community during those two years. What we realized is that giving a job to someone even if you’re a different color, different culture, different demographic, there is a trust earned and value given. Even though we were new to that culture, we could connect with them even easier. We’re giving them a job and a couple hours later we’re drinking chai with them at break time and laughing and learning from each other. So it was just a beautiful picture of how you can expedite a relationship with a people group who are totally different from you. We saw that firsthand, and it was very special. And ultimately those moments were the seeds planted for Roots Staffing.”

Brett continues, “The current co-founder of Roots Staffing called me in 2015 and asked if I wanted to start a staffing agency. Initially the answer was no, but the Lord opened my eyes to see that this thing could look like what we experienced in Kenya, sitting around a fire, drinking chai and eating the local Kenyan food. Because of the jobs we provided there, we could ask about the workers’ families and find out the barriers that they had and were able to support them in unique ways. It was through those jobs that we earned the trust, and it was the trust that allowed us into their lives. So as I got my mind wrapped around that and started researching the demographic here that has issues getting and maintaining jobs, often it’s the people who are in poverty or who have made a mistake and are in prison, or are coming out of rehab. There are a large number of those folks who need work and a lot of companies that need entry level workers. I thought that maybe we could fill a gap.”

Brett says, “When we set out to start Roots Staffing, we wanted to be sure we weren’t starting something that had already been done. We wanted to know where the problems were in the staffing industry. We realized really quickly that staffing agencies are like any business where the object is to make money. But in this case the product is a person. Individuals who worked in the staffing world often felt like they were warm bodies. I would even have companies talk to me and use the phrase warm bodies. I thought if companies are saying it and people are hearing it, maybe they are believing that they are only a warm body. That is not a valuable statement. We realized that, in general, it was super transactional.”

When asked how Roots Staffing is different, Brett says, “Like I said previously, there are a lot of people coming out of rehab or out of prison. Just because they have come through a program doesn’t mean they are ready for everything in life. We know that finding jobs and getting into a new schedule is a challenge in itself. So if you have all these barriers and now you have a new job, adjusting his hard. Also, many staffing agencies are not trying to give companies the people who fit what they are trying to do. Staffing agencies are supposed to be saving money for these companies but when an HR department has to vet ten to fifteen people and one of them stays for two weeks, you’re spending a lot of money with little to show for it. We decided to value the job seeker and the company. or the job seeker, let’s make them feel like family. So we bake care into our process of hiring. We do a phone interview and then a face to face interview. We want to go above and beyond so these folks know that this is staffing, but we care for you and want to find the right fit for you. Through that process of meeting them and preparing them, people feel they are being taken care of: that they have an advocate. When we place them in the new company, we assign them a job coach. This job coach walks beside the person for about ninety days, which is the amount of time the company decides that they want to hire them full time. Like in Kenya, we have earned their trust, so our job coach can speak into them, and they are so open and willing to share stories. For example, one guy we placed had a pregnant wife. She gave birth to twins and one was stillborn. He cried his eyes out to our staffing coordinator who is a person he had never seen. She was able to pray for him and invest in his story. Who knows? Maybe she was the only one who asked him in this season how he was doing. On the company side, it provides a better candidate for the company. Because we are taking care of our job seekers, we are getting better retention rates. The company doesn’t need me to send them ten people. I can send them two or three to find the one. So it saves them money. It does what it’s intended to do on the front end.”

Brett concludes, “As a leader, I feel it’s my job to include God in daily decisions. If I have to place four people into a company, I am praying to God to give me those four people. This year has shown me that God helps me make day to day decisions. Sometimes we say, ‘I’m allowing God into my space’ when actually He’s already here. I’m really just acknowledging Him in my space. In the beginning, I wrestled with how to bring faith into the relationship with my people. Our business is so sensitive to HR compliance that if someone feels they didn’t get hired because of faith we would be out of business. We’re not hiding God, but we feel the support we give sows seeds of the gospel. I believe God is powerful enough to water those seeds that we plant.”

Brett has been married to Trishia for fifteen years. They have three children ages 7, 8, and 9. For more information on Roots Staffing, visit their website: www.rootsstaffing.org