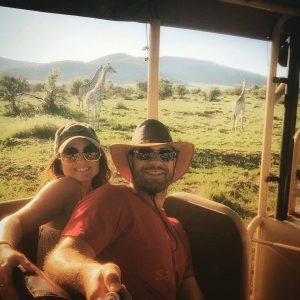 Born and raised in Johannesburg, South Africa, David Vermaak left his five-year career in project management to move to the United States to marry his wife, Lisa. He is now the Executive Director of Golden Community, the non-profit arm of Golden Technology. Golden Technology takes a percentage of its profits each year to fund this initiative.

When asked about the purpose of Golden Community, David says, “Golden Community exists to reach the overlooked and the underserved through supporting organizations such as BLOC Ministries. We partner with and financially assist organizations that have a holistic approach to helping people: mind, body, soul. We believe that restoration of a human being is only possible when all three of these are actively being engaged. We partner with them in their goals of caring for people. We also create serving opportunities for Golden Technology and the rest of the community through these partnerships. We have multiple projects with our partners and recruit people in Golden Technology and the surrounding communities to help these places out.”

Part of that helping begins within the Golden Technology company itself through programs that build into the employees and create a healthy and welcoming work culture. The owner of Golden Technology utilized a program called Younique that helps employees find their giftedness through assessments such as StrengthsFinder.

When discussing Soul, David lists a four-pronged process to begin a conversation that will create understanding between people in their diverse organization. David states, “Here are the four categories that we think are a good way to see what different worldviews say. The first one is origin. Where do we come from? The second one is meaning. What is the meaning to life? The third one is morality. Where do we get our standard of right and wrong? Why do we all seem to share some common understanding of what right and wrong is. And the last one is destiny. When you apply those four categories of origin, meaning, morality and destiny, some interesting things start happening. So we said to people that the exercise for this month is that each week we are going to have a discussion on each. We have had 20-30 people of all religions, including Christians, Muslims, Sihks and Hindus participating. They give their response on what they believe. And then we have a weekly online discussion around it. What this is doing is creating a culture within the organization where the discussion of religion is starting to become something that we do.”

He continues, “When we brought up Soul and discussing worldviews, that’s a very natural progression because we all agree that there is an immaterial part to us. Even our thoughts. A thought is immaterial. You can’t add any substance to a thought. So we had a very brief discussion around that to get everybody on board that there is this very immaterial part of us. Whether you are atheist, agnostic, theist or deist, we can all agree on that. Let’s just discuss what you think about that.”

David concludes, “One of the founding principles of this country is freedom of religion. Yet that’s very often not the case. In theory, it sounds good, but in practice in this country now there is a lot of hostility. We are a company where there truly is freedom of religion, and we welcome people to actively speak about their religion. That forms closer bonds: greater understanding between peers.”