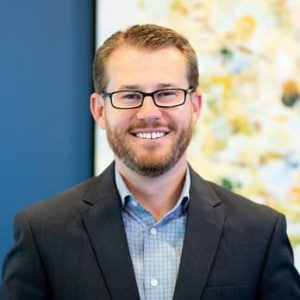 James Lenhoff’s career began with an event some would consider serendipitous, but what he knows to be the sovereign hand of God. He graduated a semester early from Miami University because he thought he wanted to join the real world.

Looking back he says, “I wish I had stayed forever (laughing). But had I graduated on time, the tech bubble was already starting to pop and no one was hiring in my field. And so it was an unbelievable gift that I walked into a hot environment that six months later was gone.”

He continues, “A year after I started at Northwestern Mutual, I was the only one left in the group that I started with because everyone else failed out. It was really hard and the world was messy. But Amy and I were living in a one-bedroom apartment and we were college kids used to eating Ramen noodles, so we made it mostly because I didn’t have a mortgage or any kids. It was just us. That was the key to surviving and getting going in this business. I tell everyone: this is a king of the mountain business. You just have to stay on the mountain long enough and prove that you are committed and care and eventually people want to work with you. But most people can’t stay on the mountain because it’s really hard.”

James met his business partner, Wade Daniel, after a series of circumstances that James attributes to the hand of the Lord on his life. He says, “Wade and I started WealthQuest in 2006. We started with $67 million in assets under management with 100 clients and now we have $1.5 billion in assets under management with 1400 families that we work for. It’s an unbelievable rocket ship story. But none of it’s mine. I didn’t do it. I was there and I showed up, but there are so many points of my story that I had absolutely no control over that meant everything. And He was in control of it all of the time.”

James wrote the book Living a Rich Life to share the knowledge he had acquired over the years about sensible and responsible stewardship. He says, “When I wrote the book, it was out of this weight that God had placed on me. That book came from this idea that I have been given an incredible privilege to walk with hundreds of people in totally different spectrums of life from super wealthy to just getting by. Kids, no kids, divorcees, widows. I’ve seen everything. And God said one day, ‘I didn’t give you access to all this for your own good. You need to share this with people’. I have this passion to get ahead of the mistakes that people make. Try to stop them before it happens because regret compounds just like money does. And so Crossroads Church approached me to build their stewardship curriculum. I fell in love with the project. It’s a way to give this away to thousands and thousands of families in a context where they are going to be working through it. So it’s going to be a sweet moment to be able to invest in it.”

When asked how this program is different from other Christian stewardship programs, James responds, “The big issue that every other curriculum has is they are aiming one message at three totally different audiences. When you have one message you alienate two thirds of the church.”

He says, “There are three different audiences I’ve identified. There are people who are in trouble and they know it. They don’t need to be scolded, shamed and ridiculed. They need hope. They need a path towards stability. They need encouragement. That’s a very different conversation than a lot of them get.”

He continues, “The second audience is the people who are in trouble but they don’t know it yet. They’re making good money but they’re barely getting by. They are accumulating credit card debt. They’re not paying attention. They need a path towards clarity because they’re not spending money that they don’t have simply because they can’t do arithmetic. This isn’t a math problem. They’re spending money to medicate an emotion. They feel inadequate. They feel insignificant. They’re trying to feel better. And if we don’t address that problem, we aren’t going to fix anything. We can guilt and shame them all we want, but it isn’t going to fix anything.”

Finally he says, “The third audience is fine. They almost never engage in the conversation because they are fine. They are good at it. They accumulate a lot of money, but they also find their security in it. They tend to over accumulate. They tend to hoard their resources. They are not fully connected to generosity. Those are three very different conversations, and the way we have built this system, we talk to each of them individually while also talking to everyone globally. So they’re having the big idea concepts taught to them but the application is specific to the situation that they’re in. That’s the secret sauce of how this works.”

When asked how someone can become involved, James says: “Go to the app store and download the app. It’s called Freed up. The first week’s worth of work is free and then it’s $99 to buy the workbook and the rest of the content. Or even better, do it in community. Whoever is in charge for your church for stewardship curriculum can reach out to me. I have stepped into the volunteer national sales director role to take this to the rest of the world. And I’m super excited about it. I believe in it. It’s such a neat approach to change the way we talk about money and to actually form communities that talk about money. Because we never talk about money. We just avoid it. So this creates a comfortable way for people in all those different scenarios to come together and talk about money in a community that’s healthy and vibrant. And so the best way to do it is to launch it through your church.”

He concludes by saying, “The thing that we need to recognize about money is that it is deeply emotional and relational and experiential, and we keep thinking it’s just mathematical. The math is the easy part. The emotional, relational and spiritual piece is where the hard work has to be done and that’s what I’m most passionate about.”

James has been married to Amy for 20 years. They have three children and live in West Chester, OH. Learn more at Getfreedup.com or contact James at jlenhoff@wqcorp.com.