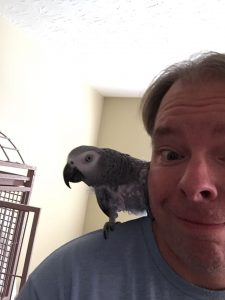 Jason has found a way to blend his skill for financial planning with his passion for comedy in a way that serves his clients well.

Jason lives with his wife, Kelli, at what he affectionately calls The Castle of the Pugs, with their two pugs and a parrot named Sassy. By day, he is a financial counselor at Goodall & Peters, a financial advisory group, and by night he can often be found performing on stage at local comedy venues.

Although he started his career as a high school English teacher, Jason felt a call in a different direction. He says, “I did the test for being a financial planner and scored in the top 1% in the nation, but the first 4-5 years of being a planner I starved because the ‘greed is good’ mindset wasn’t how I was wired.”
Having becoming a Christian in high school, Jason thought there must be a better way to approach the subject of finance.

Jason says, “In 2007, I heard about Kingdom Advisors, which is an organization dedicated to taking the financial advisor who is a believer to do faith at work at a deeper level than just teaching a financial class at church. People don’t care about how much you know until they know how much you care. It sounds so trite and cliché but it’s true. As we are counseling our clients, one of the easiest lay-ups for a faith conversation is to look at their tax returns to see where they are giving. When I see that they are giving to a church or other faith-based cause, I ask them if I can assume they are a person of faith. So as we are doing their financial planning, I ask if I can I couch their planning in the infinite wisdom of our Lord. In our society information is cheap and accessible. What people look for is wisdom, which is scarce and priceless. My job is to help people slow down to the speed of wisdom. Often in our finances, if we don’t slow down and become intentional, nothing else works. Our world gauges your worth by the number in your bank account, but the Bible tells us where your treasure is your heart is also. So when I look at someone’s budget that helps me understand where they are. My job is to nudge where their gifts and talents are, nudge where their treasure is, nudge where their time is. People expect me to be technically competent, but what they don’t expect is the emotional side: the art of the heart. It is the art of loving on them to feel comfortable because money is such an emotional issue. It is stressful. The shortest distance between two people is a laugh. And if we are laughing within the first five minutes, it reduces stress and releases endorphins so I can get to who you are as a person. You could give me the same set of numbers as another family, but the advice would be different because people are different. Since money is emotional, part of my job is to help my clients master their emotions, and one of the best ways is through humor.”

Jason says, “Seeing clients and making them laugh made me think I might be able to do this comedy thing. In 2011, I did my first open mic, almost fell off the stage and didn’t go back for a year. In 2012, I started doing more open mics and learning. In the beginning, I followed the examples in front of me which are the club comics. It was mostly adult material. Then God asked me, ‘How is it helping your witness if your clients come to see you, and you are telling dirty jokes and then all Jesus in the office? Why don’t we make it Jesus all the time?’ So I started to research clean comedy, which in the secular world typically means not funny. The reality of it is that you aren’t going to see a clean comedian in a club. So I searched out the Christian Comedy Association (yes that really does exist), and I met some of the most clever people that you have never heard of.”

Jason says that there has been a perception in the comedy clubs of what successful comedy needs to be, and feels that he is called to change that perception. “I think the Lord is about to make some significant changes in the entertainment industry because there is a clamoring for clean, family entertainment that is clever, solid, good. This year I was able to produce three shows with another clean comedian. Each of the nights we performed we were among the high grossing for the year. The clubs speak dollars per patron. What that helps show the club owners is that Christians sell tickets. I feel my role is to show club owners that Christian comics are good comics and that they are good for business. And if we are a good representation in the way we treat others by being honest and caring that’s a good thing for everybody.”

Jason concludes by saying, “If I can add the faith, the funny and the finance together, how much more impact can I make? The world worships money. If I can intertwine faith when I’m consulting or speaking about finance, I can show people how to worship our Lord instead. If I can deliver that message through the shortest distance between two people which is a laugh, then it stays there.”