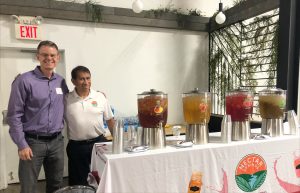 John Jordan spent thirty years as a packaging engineer and food scientist, developing new food products for a number of companies. Over the years he became concerned about some unhealthy trends that were common in the foods and beverages that we consume. He says, “I made an observation as I worked on food products that sugar is pretty ubiquitous, and not in small quantities. It’s everywhere. It’s affecting our health as a society. We consume an awful of it. So I wanted to come up with a beverage, since those are the ones that have the most sugar or artificial sweeteners. I consider that to be something we shouldn’t consume because it’s not something that God made for us to consume.”

He called his new beverage product Nectar Springs. When asked how he created this new beverage, John says, “There are a number of different ways that beverages are produced. I wanted to stick with ways that would honor God, using only the ingredients and processes that He gave us. One of the things that I drew the line on is that I would only use ingredients that God made for food. So some of the ingredients in Nectar Springs are apples and raspberries, peach pieces and raisins. I tried very hard not to use any chemicals that I didn’t think God gave us to be used in foods, including an acidifier like citric acid, which is common in beverages. It gives a long shelf life. But there are two problems with it: one is that it isn’t an ingredient that God made for us to use like that and, secondly, it makes the beverage more acidic, which is different than water. And when you don’t have that acid in it, it’s a lot easier to drink. Acidified beverages are everywhere: carbonated soft drinks, juices, sports drinks, pretty much every bottled beverage is acidified somehow.”

Nectar Springs is produced using a natural brewing process. John comments, “It’s a lot like a tea. We start with dried fruits and herbs. Then we brew them like tea. We heat treat them so they have a good, long shelf life and still have good colors and flavors. And then we keep them refrigerated. But drying also works well as a preservation process. We dry a lot of these things and put them in bags so can make it yourself.”

When asked what he hopes in the future John says, “I would like Nectar Springs to be on the menu in restaurants. A lot of restaurants, who right now are struggling, are giving away tap water to almost every customer. If you look around, about half of the customers in a restaurant drink tap water as a primary beverage. Even at nicer restaurants. I would like restaurants to be able to offer something that the customers would like better. Once that happens, I hope a large beverage company will pick it up and run with it.”

He concludes, “When people learn about this product, they often wrinkle their nose and wonder if they will like it. Then they try it and find they like it better for two reasons: one is that it has a really good aroma that helps bring the flavor out and second, we have conditioned ourselves to drink beverages with a lot of sugar or sweetener, so it’s a paradigm shift for us. When they realize that it doesn’t have the acid in it, they find that it’s a lot more refreshing than they expected. It’s pretty common for people to be pleasantly surprised.”

John has been married for 34 years, has 9 grandchildren with 2 “under construction.” Nectar Springs can be purchased at 15 stores in the greater Cincinnati area or online at www.nectarsprings.com.