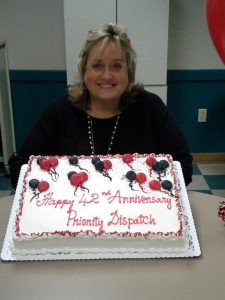 What does leadership look like in crisis? If you are Julie Thomas of Priority Dispatch and Priority Logistic Group (woman owned), it is very much the way leadership looks in easier times.

That means following the biblical injunction in Galatians to express faith through love. Priority Dispatch is a third-generation family run business founded in 1973 that is in the last mile space: providing same day delivery to their clients in the pharmaceutical and library industries. Julie, who has a background in social work, joined the company 27 years ago in the role of Human Resources Director. As the company grew, her role has expanded to senior leadership.

Julie says, “I never wanted anything to do with the logistics business. But with a family business, you just jump in and learn. So I did the Human Resources role for twelve years. My mom got sick with cancer and I couldn’t do both, so we hired an HR director and I took care of my parents for two years. Now we have two logistics companies; one is woman owned because our customers were asking for that. Priority Logistics has 1200 people on our payroll in eight states and when we are asked to go to a state we are not in, [we’re able to] outsource the business to another company.”

Julie states that, “Galatians says that the only thing that counts is faith expressing itself through love. And so in a very practical way, what does that look like? To me, in a business, it means having values that strategically align to that. One of our values is respect. How do you unpack respect in a practical way in a blue collar industry? Respect to me means unconditional high regard. That takes away the hierarchy of treating people differently depending where they are on the org chart. So it’s listening to people, it’s paying them accurately and on time, It’s paying them a good wage, it’s communicating. One of the things we used to do that was unprecedented was having meetings all over the state to show them our finances. That type of open book management helps the drivers understand our financial situation. As far as the culture goes, it’s hugely respectful to communicate this way. So the triangle becomes inverted. The top of the chart are the people on the front line. In all of this we ask ourselves how would you like to be treated. I’m very proud of the fact that we made that decision a long time ago. Having a culture of respect is everything.”

In a crisis situation, the practice of communication becomes even more important. Julie says, “When you have a crisis, the main thing is how do you communicate to all of your people that all is well? This week I hired a videographer to film our leadership team to get information out quickly via video to tell our drivers what we are doing. They worry about losing their jobs. Different kinds of communication and communicating often, is something we are doing to help reduce those fears.”

One of the core values at Priority Dispatch is giving back to the community. Julie says, “You lead by example and give folks the chance to choose what they would like to do to give back. It’s not just a corporate mandate. They own it themselves. When Hurricane Katrina hit, Matthew 25 Ministries didn’t have trucks to deliver the supplies they collected. We took fourteen trips to New Orleans to help. My HR director and I were on one of the first trucks, but I couldn’t reach the pedals. So I had to ride the whole way and felt so bad.”

Julie’s care for her employees means looking for ways to serve the individuals who work closely with her. One of those people is a single mom who does some of her work from home.

Julie states, “I found out that she was working from a couple of boxes that she stacked up and put her computer on top. That’s not what respect looks like. I met her at Big Lots and bought her a table, a chair, and a lamp. I told her it wasn’t ok for her to work on a cardboard box. I wanted her to have a nice place to work. She sent me a picture of the office she set up, and it looks like an office. To me, that is love.”