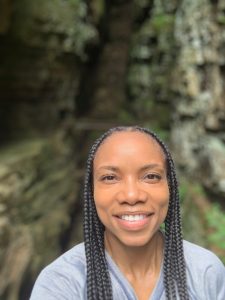 Karla Blair’s faith journey has taken her from a childhood as one of eight children raised by a single mother to a successful career in corporate America. She says, “I was born and raised in Detroit, Michigan. Those first years were very up and down; my childhood was not the easiest. I grew up with a single mom, and I had seven siblings. We had very little means, but through scholarships I was able to go to college. I married, had a couple of kids, divorced, and life took its course from there. After my divorce, I was really struggling to figure out what now, how to make ends meet. And it took a few years, but I started to recognize the things I learned as child with a faith background. But growing up with it didn’t mean that I had taken ownership of it for myself. So it wasn’t until I started applying the Word to my life and understanding some of the choices I had made that I could see clearly that the path I was on was not a good one. And so I had to course correct and make a decision. Was I going to be a true follower of Jesus Christ? That was a decision I made. I was remarried and we had a son together. I feel like that is where my life truly began to flourish.”

After jumping into the deep end in computer science, Karla changed her major to accounting at the end of her freshman year of college. That course of study is where she flourished, but as she was finding success in school, she was receiving what she thought was a different pathway in life. She says, “I received a word from a minister at my church who told me I was called to ministry.

I thought, ‘Wow, ok, now my life is really going to start. I’m going to work in a church because that was what I thought was full time ministry.’ But over the years, through God’s grace and hard work, I started getting promoted at work. You would think that is something I would be happy about, but I was frustrated. I thought, ‘I’m getting promoted at work in corporate America but I’m not seeing this transition to full time ministry.’ So I thought I was not fulfilling God’s purpose was for my life. After a couple of years of trying to figure it out, God spoke to me and said, ‘Are you going to be happy if this is where I have called you? There are people in corporate American who are never going to know me unless they know you.’ It was like heaven opened up and the angels were singing. I realized that I was where God wanted me to be. I was walking in my purpose. I just didn’t know it. Once that revelation came through, it changed everything. I stopped looking for an exit plan and I started looking for an entry plan into God’s plan. I realized that my walk with the Lord wasn’t something I did outside of work. It was part of who I was. I started learning to bring my whole self to work long before that became a buzz phrase. How do I show up every day and represent Christ?”

She continues, “Today I’m twenty years down this journey as a marketplace minister. One of the ways I bring faith to work is that I am very comfortable, when I hear bad news about something or someone, to say: would you mind if I pray with you or would you mind if I pray for you? And I’ve had people immediately accept that offer. Not saying, ‘Yes will you go home and pray for me,’ but holding out their hands and wanting to do it right now. That is just one example. Others are simple things like sharing my faith in settings where you wouldn’t naturally feel like you want to do that. For example, during COVID when everyone was stressing about how we were going to make it through, it was the perfect opportunity to talk about my faith in Jesus and the word of God. Because His word says XYZ, I can have confidence in what He says. So things like that where you become a little more bold. Where you don’t just say, this is what I believe, but this is who I am.”

When asked if she has concerns about sharing faith in a politically correct corporate work environment, Karla says, “The first thing I think when that ‘What if’ negative scenario plays in my head is to think about “What if” the positive? If I’m on assignment from God, I have to believe that what He has called me to is good. Not only for me and the kingdom but for the person I am going to encounter. It doesn’t mean that something negative might not happen. There may be some repercussion. But when it’s all said and done, you’re going to come out victorious. In the middle of any circumstance, you don’t always see the end of how it’s going to turn out. But if I have a promise from God that all things are going to work together for my good, then I believe that. So even if something negative happens, I firmly believe in Romans 8:28 that all things work together for good because you are called for a purpose.”