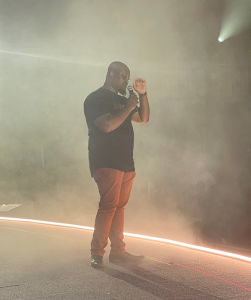 Orlando Hale is a multi-talented young man who has harnessed his gifts to serve those who serve young people. Part of his journey, however, has been learning to understand why he seemed to have so many divergent paths when others found their lanes so easily.

He says, “I am the Greater Cincinnati Area Coordinator for the National Network of Youth Ministries, which is a very long title! What I do is build faith community partnerships to resource, network, train and support individuals that work with young people. In the church setting, that’s mostly focusing on youth pastors and youth volunteers. In the secular space, it’s supporting the local librarian who works with young people, the community center, teachers: those individuals who believe in Christ that want to impact young people and build their confidence.”
He also serves as a Chaplain for the Hamilton County Youth Center, which is the juvenile detention center for Hamilton County, Ohio. He comments, “I personally have a fairly decent history working with incarcerated youth. That is where my heartbeat is, and God always finds a way to put me there. One of my first jobs was at a juvenile detention center in Alabama working as a regular employee. Eventually I became the unofficial chaplain. They found out I was a youth pastor and so all the questions about prayer and God and a relationship with others came to me. Even though I was only 21 at the time, I became everyone’s dad. I went by the name Pops. I found my heart for young people, especially those who are disenfranchised and particularly those who are incarcerated.”

He continues, “During my time in Alabama, I was the most backwards person you ever met. Usually there are people who have their lane and they do it really well. Me, I was majoring in aerospace engineering, then changed my major to music. I was also a youth pastor and worked with the city of Tuskegee in the community and economic development department. And I was working at the juvenile detention center. A lot of what I did was all these random things – or at least that’s what I thought.”

A conversation at the juvenile detention center brought all these skills together. Orlando says, “I was talking with an incarcerated young person. He asked, ‘Why do you talk to me the way that you do?’ I was like, ‘What do you mean? Am I offending you?’ And he said, ‘You keep asking me how I’m doing? So what do you want?’ I said, ‘I just want to see if there is anything I can do to help you out. Are you actually ok’. He described to me how uncomfortable that made him feel. He had never had anyone care for him without some kind of motive. He really believed that I was asking how he was doing to find a leverage point to manipulate him. I told him he was right: that I am absolutely trying to leverage him because I want him to know he is loved and valued and cared for. He didn’t have to earn that. For him it felt dirty. All the other things that were dirty felt clean to him and all the things that were clean felt dirty. It was in that moment that I realized it’s like going into a store to purchase something, but it has the wrong price tag.”

Orlando continues, “In that moment God brought together all my experiences, all the things He was taking me through because He needed me to learn these different things to do what I’m trying to do with young people. And that’s redefining what love looks like, what success looks like, what support and care look like. Because they don’t know. I began to reflect on my own life: how I didn’t feel supported, I didn’t feel cared for. Even at work at the juvenile detention center I did not feel that they cared for the work that I did or that I cared for the kids. So that led to a path of figuring out how to support young people by recognizing that the people that do the work get burned out quickly. They don’t feel supported, they don’t feel loved. It makes it impossible for them to show that to young people. So then my brain started working. I know community economic development, I know systems, I know structure, I know to make things work. How do we create an infrastructure around people who do the work? So then my work with music as a choral director came into play. The concept of getting everyone with their different parts playing the same piece of music. People working in harmony, not necessary in unison, can make a big difference. Even now, looking at God bringing all of these things together, my role is to get all these different youth leaders who sing these different parts, with their different skillsets, to really embody the music well and to work in harmony with one another, so that the audience, the young people, can receive the heart of God. I began to see God working all these different parts of my life: my care for youth, my systems and processes, my love for music and people coming together, to one pivotal moment where it just clicked. In that conversation with this young person who was honest with me and asked me a really tough question that I had to figure out, this is what God has put inside of me and wants to bring out of me. I will never forget him. He really helped out that day. He saved my life because I was so confused. I came full circle.”

Orlando is a Cincinnati, Ohio native. He and his wife are expecting their first child in April. Orlando says he loves his hometown and is so glad to be back there after spending time in other places.