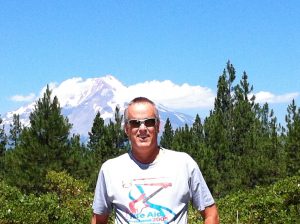 Pete West is challenging the typical American mindset of retirement being a time for relaxation: for soaking in the sun or playing endless rounds of golf. Instead, he believes that a retirement career offers a unique and purposeful opportunity for contribution to the world that may go far beyond a person’s first career.

Growing up in a military family as the son of a Three-Star General, Pete spent most of his childhood moving from one place to another. From the time he was in 5th grade until he left for college at Duke University, he never attended the same school for more than one year. Pete says, “It teaches you adaptability, but when you’re growing up it plays havoc on social structures except for the fact that when you’re on a military base, everybody’s social structures are screwed up.”

“I decided that I didn’t want to go into the military when I grew up,” Pete says, laughing. “I wanted to be a civilian and stay in one place for more than 3 years at a time.” Instead, Pete turned his degree in mechanical engineering into a 32 year career with Procter & Gamble. He says, “I’m one of those rare commodities that spent their entire career at one company. I moved around a lot with P&G, although not as rapid-changing as military life. I spent ten years in North Carolina, went to Brazil for 3 years, came back to Cincinnati, moved to The Netherlands for 3 years, then came back to Cincinnati and finished out my career. To a certain degree, P&G allowed me to be more diversified in international awareness: having to deal with different cultures that puts a person into a minority position. You look at the world as a minority instead of a majority. That’s not an experience that everybody gets to have, but it’s very helpful in terms of developing a sense of empathy for others.”

When contemplating retirement, Pete considered what he wanted to do with his life after Procter & Gamble. He says, “32 years at P&G provided a lot of skills and capabilities that I can use in the second half of my career. I told myself that I wasn’t going to retire from Procter & Gamble until I knew what I was going to do when I grew up. I had become involved with Self Sustaining Enterprises doing some projects in Nigeria developing hydroponics and aquaponics. Fun engineering stuff like that. I realized this is an entrepreneurial environment and highly innovative and flexible.”

Pete saw that this environment would allow him to explore his creative side: something he was not able to do during his first career. “My mom was a painter and a poet, so I have a lot of painter and poet in me. But there wasn’t a big demand for painters and poets in supply chain management at Procter & Gamble. Plus it’s a big company, highly bureaucratic and structured. And I’m not really a very bureaucratic, high structure person. I color outside the lines all the time.”

Pete says, “Self Sustaining Enterprises or SSE is a non-profit group that is an extension Of Grace Chapel in Mason, Ohio. We view it as the missions arm of the church. Its focus is to launch faith-based business enterprises that both pay for themselves or begin an engine for providing funding elsewhere. The key is launching marketplace enterprises that have both a ministry element inherent in the business as well as a source of funds and resources for other ministry.” Besides an economic zone in Nigeria, SSE has helped launch 35 projects locally, including a hair salon, CrossFit gym, and a landscaping business.

Pete continues, “You never really retire. Retirement is a relatively modern conception. For most of civilization’s history you work until you die. We’re now in a position where people can realistically retire from one career and be self-sufficient and stable for the rest of their lives, but the myth that what you want to do is move to Florida and sit on the beach all day is really somewhat unsatisfying. It’s an idea that we propagate in our culture. In reality, what’s more important is understanding purpose. Doing something that is meaningful and constructive with your whole life, not just the life when you were working. In fact, when we’re in our primary career we have lots of distractions. It’s a busy period of life. So when your kids are out of school and you have streamlined your life, you have a lot more flexibility. You don’t necessarily have the same amount of energy but you do have an incredibly bigger reserve of wisdom. I would argue that your most productive and purposeful time is after you have finished a career in something else. That doesn’t imply that the ‘something else’ wasn’t purposeful. You learn a lot which makes you sharper when you come to your second career. Too often we lose that wisdom when people retire from their primary job when in fact we can repurpose all that wisdom towards Kingdom focused activities. I often tell people I want to die on the battlefield. I want to be out there fighting even if I can barely lift the sword.”