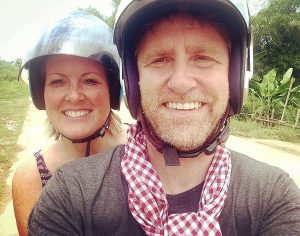 As many faith at work stories often begin, Rick Baltzerson entered college with an idea of what he thought he would do for a career, but God had other plans.

After his first year in college, he changed his major from chemical engineering to English literature. His goal was to work in the publishing industry as an editor and writer, which he did for 20 years.

He says “I started working for a small legal publishing company in Cincinnati, Ohio. They published laws for cities. I thought I would be there for a year to get some experience and move on. I ended up staying there for many years because there were so many opportunities. The other theme going on at that time was that I had real interest in international things. I was a Peace Corps volunteer right out of college. I live in Sierra Leone in West Africa, taught English and Math to high school students. When I came back to the US, I kind of wanted to do something with it, but I didn’t know what. I feel that God put me in the right place at the right time because it turned out that the little legal publishing company offered me those opportunities to work and travel and do projects overseas.”

God led Rick in a new direction when his company was involved in a buyout and the focus was shifting away from international projects. Rick states, “When I look back I see God’s hand at each stage of my career: preparing me for one season, giving me skills and experience for the next season, which led to the next and the next. When I reflect on it, I’m amazed at where he has taken us and what He has allowed us to do. I’m either that lucky or that good, but I don’t really think I am. God has a good plan.”

Rick was hired as the national account manager for a Christian publishing firm with the task of getting their books into major retail booksellers. Although he enjoyed the work, it soon became apparent that his heart was in the international mission field. He says, “I wanted to focus more and more on the international aspect of what I was doing. Specifically on mission work. By then I had met and married Jen. We met on a mission trip to Nicaragua. We always knew that missions would be part of our future and we wanted it to be part of our plan. We did a lot of one week mission trips. That was a first step: wading in the water. But I think more and more God put on my heart that I wanted to do this full time. I started looking for jobs in that field, but I was surprised to find that the jobs did not pay. Or if they did pay, it was a fraction of what I was earning in my corporate job. I applied for several of them and thought I was going to get one with a mission organization because my skills lined up with what they needed. It seemed like it was destined to be. So I was even more stunned when that didn’t work out. Then I got a job at Western Union, a Fortune 500 company, and earned even more money. That puzzled me. But I see that the five years that I spent there gave us the means to fund our next stage in the mission journey. It also taught me a lot of lessons and a lot of skills that I would use in our own mission journey five years later.”

Rick and his wife Jen rekindled their passion for international missions, specifically in the area of human trafficking work. After visiting Cambodia and Thailand doing short term mission work, they felt a call to go deeper. Rick comments, “when you go on a trip and see those things you have two choices: you can jump all in or you can come back and say ‘oh those poor kids. We did what we could’ and then go on with your life.”

After a year of preparation, they moved to Cambodia for two years to work on the ground with a Christian NGO involved in rescue and restoration of those victimized by the sex trafficking trade.

Rick comments, “just before the pandemic hit, we decided to start our own organization. It’s called Women are Gold. We named it that for a very specific reason. In Cambodia there is a Khmer saying loosely translated ‘men are like gold but women are like white cloth’. That means, in the context of human trafficking, is that if a man does something to tarnish his reputation, he can do something to be cleaned up, shined up and be good as gold again. But for a woman, there will always be a stain on her like a stain on a cloth. There is a lot of shame and shunning. Our feeling is that with God’s love you can shine too. So women are also gold.”

The focus of many organizations is to rehabilitate those who have been trafficked. Rick says “that’s good and valuable work, but for us, we feel that it would be best if a young woman never had to go through that at all. So we decided to focus on human trafficking prevention. What we do is establish a community center as a starting point to provide training and education for young women to empower them. If they are young enough, keep them in school so they can at least graduate from high school and then allow them to have the skills to find a job with a future where they aren’t just surviving but thriving. We live a part of Cambodia that is more rural: more of a town than a big city. There still is an idea that if family has a lot of children and can’t afford for all to go to school, it’s often the daughters who are expected to quit and help the family earn an income. In some ways it can mean helping with the family business. But in other situations they can tend to take jobs that are more vulnerable and risky. The situation is not always cut and dry. We want to help the families avoid this.”

He continues “we have three specific programs right now. We have a community book study that teaches empowerment and goal setting. We have a personal finance and training course that which teaches families how to save money and eliminate debt. High debt is often a driver of being in a situation where girls are trafficked because the families are desperate for survival. The third is a basic anti-trafficking awareness class. We teach what to look out for and avoid. More and more that involves teaching about online job scams.”

Since embarking on this latest journey, the Baltzersons have encountered hardships both physically and in other ways. But there have been victories as well. They have hired staff that have accelerated the growth and reach of their work. And they have established partnerships with other ministries, churches and the government to further expand their training options. Rick says “that is the ultimate goal. To offer programs and services that impact people’s lives. And not to do it alone. We want to impact the community where everyone is healthy and safe and able to live the life that God calls them to live.”

Rick and Jen Baltzerson live in Kampong Cham, Cambodia. They have three grown sons who live stateside. If you would like more information on Women are Gold, check out their website: https://www.womenaregold.org. They are also on Facebook here – Women Are Gold #AWOPHometownHero