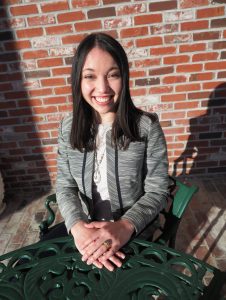 Sabrina Donley’s story is one of family legacy: the beautiful outcome of one generation building into the next. Having been born into a cross-cultural family with her mother from the United States and her father from China, Sabrina had the unique opportunity of living in both countries growing up. In addition, her family has a bend towards entrepreneurism. Sabrina says, “Since high school I have been part of our family business ecosystem. Really in the past five years I have seen a big breakthrough in us submitting to what God’s kingdom plan is in the work that we’re doing.”

When asked what it is like to work in a family business, Sabrina says, “It’s wonderful. Family business is the absolute best, and it can be the absolute worst if you aren’t intentional. But I think growing up in an entrepreneurial family, seeing all the good and the mistakes made, too, and rooting myself and my husband in the Bible: asking God ‘what do YOU say about business, what do YOU say about finances, what do YOU say about the world in general’ has helped. I was able to come back into that family business ecosystem and say, ‘Hey, I see a couple of areas where we are doing really well, and I see a couple of areas that are non-negotiable If you want me to be part of this, these need to be looked at.’ A lot of it was the family dynamics which was really cool. I think that At Work on Purpose was part of that transformation five years ago of seeing that change. Since then, it has been really wonderful.”

Sabrina’s current role is as Relationship Manager for CybrCastle, a cyber security company started by her father and three other colleagues from the At Work on Purpose community. She comments, “CyerCastle came from a lot of learning in my family of not just saying, ‘God is with me and I have favor. Talk to you in five years.’ It’s more of this is His idea, His business. He is the one who gave people the vision to join. My dad didn’t come from a cyber security background. But he was able to bring in the people who are top cyber experts from around the country. It wasn’t him. It was him listening to the wisdom of God to make that happen—learning every step of the way.”

She continues, “It’s literally part of my job description every morning to pray. I had a conversation with my Dad and said I didn’t know the answer to a problem. He said, ‘Did you pray about it first?’ I said ‘no.’ He said, ‘Pray about it and tell me later.’ Later in the day he asked me what God said and I told him I hadn’t asked Him yet. He said, ‘Sabrina, I’m not going to tell you the answer because you need to learn to rely on God for what that answer is. I don’t know everything, and this is His business. You have to be able to steward it in the same way.’ I’ve learned that every email, every phone call, every meeting, I invite the Holy Spirit in. He will give you the sense of which way to go. Sometimes it’s, ‘Hey, you need to meet with this person’ when on paper I don’t understand. At other times, you have done all the work and the financials line up and God says, ‘Nope, pull the plug. Don’t do it.’ In either case, He says ‘You’ll see later,’ and six months later you see what would have been a good or a bad idea. So I think it’s learning to seek Him first in the vision and in the day to day things. Even in sales, marketing, channel partnerships, business development, which can be a lot on your shoulders potentially. Seeking God in that makes the yoke easy and the burden light.”

She concludes, “My hope is that through what we provide, people would feel peace: peace of mind peace. And of course that’s helping their company be secure, but also knowing that they can rely on these people and they will give me the best software, tools and advice. But it’s more than that. There are a lot of parallels of cyber attacks to spiritual warfare. Cyber attacks are digital. You can’t see them. Their goal is to steal money, kill businesses, destroy organization and what does the enemy do? Kill, steal and destroy. It ends up spurring some really interesting conversation in their leadership and technology team because there is a lot of fear, and we are helping to inject peace of mind into that.”

Sabrina and her husband, Derek, live in the Cincinnati area with their dog, Daisy.