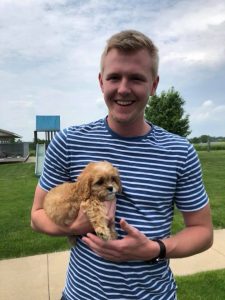 A popular topic of conversation among older adults is what life will look like when the torch of leadership is passed to the younger generation. If Spencer Hogan represents this next gen of leaders, they have nothing to worry about.

Spencer comes from a family where both parents own businesses. From them, he learned a strong work ethic, which translated into several energizing jobs as he entered his teens. His first job was cleaning golf carts. From there, he was a host at Cracker Barrel, followed by another golf course job. While working on his undergraduate degree, he served as a youth pastor for a church for over three years. Currently in graduate school, Spencer now works between 40-50 hours at three different jobs.

When asked about his thoughts on being faith active at work, Spencer says, “We talk about faith at work. What’s odd is that I found myself being faithless at work as a youth pastor. There are so many things that are cumbersome: things that require your attention so that you are taken away from what really matters—and that is your faith. I found myself worried about numbers in youth group on Saturday night, about getting emails sent, about connecting with volunteers. There were so many tasks at hand that being faith active was so foreign to me, and it shouldn’t have been because I had a job that was supposed to be about faith. I say that because even in professional ministry it’s easy to not be faith active at work. No matter where you work, everybody always has a long list of to dos. If you want to be faith active, you have to make it a priority.”

He continues, “I hadn’t realized how faithless I was being in my career until I was around people who were faithful. I distinctly remember being in my first At Work On Purpose® Collaboratory and hearing how successful business leaders were incorporating Jesus into their lives and into their work. It was incredibly inspiring to me because I hadn’t had those conversations before.”

He gives the example of a friend who recently called to ask him to pray with him about who to invite to a dinner party. He says that it seems like such an insignificant ask, and yet his friend is right. We should be praying.

Spencer says, “It is a posture change to realize that you have to intentionally choose to love the Lord in all you do. It’s not about cutting out bad habits so you sin less. We just need to be intentional about being with God in everything.”

Spencer concludes, “You don’t have to be a Christian to be a good leader. But if you want to lead people in the way God wants you to, you have to incorporate Jesus into the way you work. What I’m learning is that being a Christian leader is an incredible thing. It’s a journey. Leadership to me is like a parent changing a diaper. It’s messy and full of unexpected surprises. We all want to have kids until we realize they need to be potty trained. In the same way, leadership is full of the nitty gritty of peoples’ lives. I want to be a leader that wants to change the diapers: to get into the tough places. Leadership is helping others learn more about themselves and helping them love others better. I want to be a leader who steps forward.”