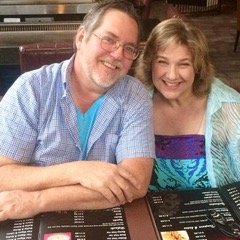 Stacy Doose grew up in a faith environment as a second-generation preacher’s kid. His maternal grandfather was a Pentecostal minister in Birmingham, Alabama. He says, “I was kind of raised in the church but there wasn’t any real push for me becoming baptized because my mom was pushed to have her faith dictated to her. So she gave me a lot of latitude. I did eventually come back around. When my kids were little I started them going to church and afforded them the latitude to have their own faith walk instead of something I prescribed. Fortunately, both of my children followed along.”

When asked about his vocation, Stacy comments, “I’m kind of a jack of all trades in the video business. I shoot, I edit, I write, I do some fairly high graphics work as well. I was blessed to have my college internship be offered as a full-time job. I soon outgrew that and found a job in the most prestigious post production house in Cincinnati at the time. I was in the right place at the right time. I’m sure God made sure that it happened because that was 45 years ago and to have the clientele I had when I was in my early 30s has built this very strong foundation for me.”

Any talk about Stacy’s abilities eventually leads to a conversation of the awards he has won, which is a subject that he reluctantly discusses. He says, “God blessed me with some remarkable awards. The Society of Professional Journalists saw fit to give me a first place trophy for a piece that I had done about the 30th year reunion of the Who tragedy. And I was given an Emmy for my 2008 coverage of the Presidential campaigns here in Ohio. And there were others. It’s funny because I got all of these awards in a very short period of time, but I wasn’t happy in my job. The large media company I worked for at the time didn’t know what to do with me. I was a video editor. I was a one off. I realized that as God had seen fit for me to have these really illustrious awards, He was setting me up to be in business for myself.”

He continues, “I’m not so impressed with the awards as my potential clients might be. I don’t hang my hat on these gold statues, but they influence a client base, and that’s important. It was God’s way of saying ‘well done my good and faithful servant’. I stood in my dining room shedding tears that I didn’t want to work in the media industry anymore and soon after that, the awards came. I think it was my obedience and willingness to give of myself to His kingdom.”

When Stacy realized his job would soon be eliminated, he began to build a client base. He says, “ I was laid off on a Friday and on Monday I called the Cincinnati Opera, who was my client and current project. I told them I was laid off but I wanted to continue to finish their story and turn it into a PR piece. They asked what they could do for me, and I said, “Well, you could pay me!” They said OK, so I literally did not miss a day. It was another way of God saying He was with me: to trust Him and He will make me prosperous in a way I hadn’t thought of. I met my business partner, Glenn Hartong, 40 years ago when I was in my college internship. We really hit it off. We both strive for a level of precision and exactness in what we’re doing. Combining our talents, we formed ChiliDog Pictures, and it has grown into what it is today.”

He concludes, “There were two ideas under which we formed the business. First, if the business got in the way of our friendship, we would dissolve the business because business is business, but friendship lasts forever. The other thing was we wanted to do work for organizations that were doing good in the community.

We do a lot of nonprofit work for St. Vincent de Paul, Cincinnati Children’s Hospital, the UC Foundation, Dragonfly Foundation and others. We’ve been successful in that through no effort of our own. We don’t advertise. People find us. I can’t tell you how delightful that is: that we don’t have to worry about where our next client is coming from. It’s very often that we ask about budget with our nonprofit clients. They say, “We only have X number of dollars” and we respond that’s why we are in business. So that we can make the quality projects that they want with the budget they have to spend. We have enough high-end clients that we can do that. So our faith contribution is using our talents for good.”

Stacy lives in Cincinnati with his wife, Heidi. To learn more about ChiliDog Pictures, visit their website: https://www.chilidogpictures.com