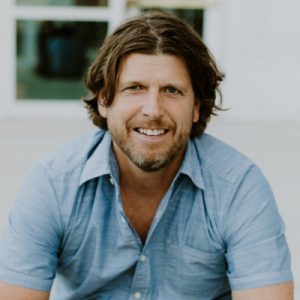 How will we respond when God interrupts our seemingly safe and secure career and asks us to take a different path? Will we resist or will we respond? That was the choice that Tom Busch faced in 2019.

In the beginning, Tom’s career in his family’s business seemed like a path that would continue throughout his lifetime. He says with a smile “shortly after the Mayflower landed I started working at Trophy Awards. It was more like 1986. I was half way through high school and my parents bought the company. It was Mom, Dad and one employee. That was it. When they would get busy they would ask me to come in and punch out some trophy plates and engraved name tags. In college and grad school I worked there 20 hours a week except for summers when I worked full time. When it was time to graduate I became a school teacher in paper only. I thought I would be a missionary, a youth pastor, or a teacher. Ends up I was neither. I started working full time at Trophy Awards in 1994 and got married in 1995. A couple of years later we were having kids, and Mom and Dad wanted to have someone to come in and run the business more seriously.”

He continues, “I bought Trophy Awards in 2001 and became President. My brother-in-law was Vice President and my sister was Secretary. We did well on the surface with a lot of success and growth. Years passed and we had 40 employees and were doing revenues over 40 million dollars a year in awards sales. I had thought that I would make a teacher’s salary and was okay with that. It ended up through the prosperity of the company that I was able to generate good revenue from the company.”

Tom says, “In 2019 I started feeling restless at work. I was watching the clock: how much longer is this day going to go. I was talking to my coach about it, and he recommended that I take a sabbatical. I had never taken more than ten days off in a row in thirty years. I had never even had a two week vacation. It’s not something you get to do as a business owner. The other owners said it was a good idea, and they would pay while I was on sabbatical. I left in August of 2019. It was supposed to be three months. In that time I was trying to identify who does God say I am and how do I really see Him. I have met people who are really good at hearing God’s voice and I’ve had some experience where I sense that. I wanted to mature in that space and the sabbatical was a good time to quiet myself, seek God and hear what He has in store for me. And as the sabbatical went on, I felt this strong call to coach and to teach and to train. It makes no logical sense at all. Why would you give up this elite life? But that’s not what I want anymore. It’s no longer peaceful to operate in that zone. So I talked to the owners as the sabbatical ended about buying out my portion of the business. I feel we went into this process and had a genuine desire to help each other. On February 14 I sold my share of Trophy Awards to the current owners and I left 30 years of stability in order to pursue something that, in my Dad’s voice, was not very practical.“

“That’s where I am now. Five months into a coaching career and it’s amazing how joyful work can be when we get to do the things that we love to do. Coaching in my own life allowed me to mature spiritually into zones I never thought I would be able to mature. It enabled me to relate to people in ways I never thought I would be able to relate. It enabled me to have more clarify of mind to recognize those narratives that are driving my behavior. It helped me see how developed is my self awareness. I could look at all the components of health but those three in particular transformed me as a husband, as a business owner, and even as a normal church going type of dude.”

Tom feels his purpose is to use the mistakes he made in his life as a way to help others. When asked who he is looking for as a coach he says, “people who want to do well, trying to be good Christians, and yet failing to lead the way they want to lead. Failing to have the impact they really want to have. Failing to make disciples in the workplace based on limiting beliefs. And limiting relationships. That’s what I want to change.”