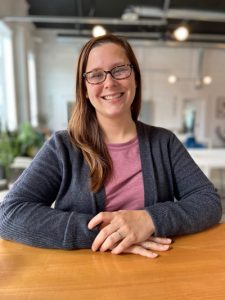 Whitney Blackston and her husband, Jeremiah, had planned their perfect family and their perfect life. They dreamed of having two or three children, teaching them their love of playing ball, and spending their entire lives in their hometown of Caledonia, Mississippi, a small town close to the Alabama state line. When Whitney was expecting their first child in 2012, it looked like that dream was beginning to come true. However, after daughter Emerson’s cesarean birth, the delivery room become chaotic.

Emerson was born with a series of previously undetected medical needs. She was hearing impaired, blind, and non-verbal. The most immediate concern was that she had not developed a nose, and since babies are nose breathers, she wasn’t getting oxygen or releasing carbon dioxide and was quickly shutting down.

Emerson was rushed to the only children’s hospital in Mississippi, three hours south of their home. Whitney says, “It was supposed to be the best day of our lives but it was traumatic instead. I’m not going to lie. I had shut down. I was upset. Traumatized is the word I would use. I was very discouraged. And she was fighting all the while to live. And so it hit me one day. This little baby is fighting so hard for her life. Her mama needs to come behind her and help her. I can’t stay in this place and help her. So with the Lord’s help I picked myself up by the bootstraps, and we fought. Eight weeks later we were able to come home, but it was 9-10 months of her first year of life that we were in the hospital.”

She continues, “The first four years were hard and they were dark and they were isolating. I wondered if they were ever going to end. It felt exhausting to think of fostering new relationships. Fear of being misunderstood and judgment kept us on our island. But the Lord placed a family in our path in 2015 who were heavily involved in the ministry Joni & Friends.” At a family retreat with that ministry, they made new friends and found themselves growing in Christ and becoming part of a community.

Whitney says, “a doctor told us that we were doing a great job as parents, but Emerson never needs to get stuck in her own head. She is so smart. In Mississippi we were learning along side her providers, and she wasn’t really getting the best educational resources. And of course, Cincinnati Children’s Hospital is the best. Our original plan was to stay in Mississippi and be rooted there but we quickly felt like this wasn’t the best for Emerson. So we knew it would be a step of faith (to move to Cincinnati). I was really scared. I was trying to talk myself out of it. And one day I said, ‘You’re not going to be alone’. We were saying that we were going to be in a place where we don’t know anyone, we don’t have family. But God is in Ohio, too. Even though it might be difficult, He will be with us all the while.”

Soon after their move north, Whitney and Jeremiah were introduced to Kevin Schwieger, who was in the early stages of developing Luke 5 Adventures, a ministry that makes the impossible possible by taking people impacted by disabilities on hiking trails that they would not be able to access otherwise. Whitney says, “Kevin told us he had this chair that could help people impacted by disabilities. He said he would like to take our daughter out. We got out on our first hike and after that we were hooked. Because she is hearing impaired and blind, you would probably wonder how she would perceive the experience. For her it was sensory. She could hear the noise in nature: the bugs, the birds and felt the wind on her face. She felt the bumps in the trail from the rocks and the roots. She loved it. But most of all it was a family experience that we were not able to have up until that point.”
After a joint event between Joni & Friends and Luke 5 Adventures, Kevin asked Whitney to become Co-Director of the ministry. Her role is to organize out of state and local events and give the new families the same welcoming experience she had with Joni & Friends. Whitney concludes, “The Lord never wastes an experience. He is using my experience to set me up to be uniquely qualified to help families like mine. For us, when we were in Mississippi and were on an island, it was a very hard place. As a vision for Luke 5 Adventures, I want to impact as many families across the United States as we can to get off that island and also grow closer to Christ in the experience. I want to help them as we have been helped.” For more information on Luke 5 Adventures, check out their website