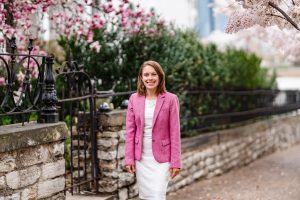 Whitney Webster’s motivation to become a lawyer began in high school when she became friends with a Chinese woman who was helping her learn the Mandarin Chinese language. She says, “My tutor lived in the same Midwest subdivision as us. She would walk over to teach me Chinese a couple times a week, and our family got to know her. She went to a small Chinese church where they all spoke Chinese. Her English wasn’t the greatest at that point. Someone from our church knew of her, and that’s how we got connected. The more we got to know her, and she started sharing more, we learned that she was involved in domestic servitude, basically trafficked here by an American man. He met her and then went over to China. She came over and got married to him and became a prisoner in her own home. We had no idea. All these things started coming out more and more. I went to the Chinese church with her sometimes, and my parents would drive her. She would ask that my parents drop her off a few blocks away. She was trying to protect us so her husband didn’t know about us. In the end, my family, our church and the Chinese church came together to get her out when she was ready. She had a police escort come when her husband was at work. She was placed in a shelter. Her husband was never convicted or charged, so he got away with everything. That’s what spurred my interest in law.”

While in college, Whitney became involved in groups that focused on human trafficking issues, which was and continues to be a passion of hers. Other similar interests began to surface as well. She comments, “When I felt that God was calling me into law, I put down a list of areas that I wanted to be involved in. Immigration was actually on my list and so that was one door that God opened up through a colleague in Cincinnati. She was leaving her job at an immigration firm, and she called me with a job opening. I went and was interested. It was probably a 15-minute interview and got the job. That was my first job in immigration. I fell in love with it and knew that’s where God was calling me.”

From there, Whitney worked for a couple of different firms and interned with the Immigration Court in Louisville. Then in the middle of the pandemic, she felt God was calling her to take a leap of faith and start her own practice. She says, “The vision behind that was to help with religious worker visas more and have more freedom to openly share my faith the way I wanted to with my practice. [In addition to law school,] I graduated from Boyce College at the Southern Baptist Theological Seminary. Theology is one of my passions. It’s interesting how all these passions come together. For religious worker visas you are showing their beliefs and denominations, so that is my background in Bible college. Before I went to Boyce, I was studying intercultural ministries. It was really neat because, for a long time as a child, I felt called to be a missionary. With immigration work I am helping pastors from other countries come here to minister to people who speak their language or speak to American churches. It’s so neat with all the different cultures I work with, understanding that my mission field doesn’t have to be overseas. It’s right here.”

She continues: “A few months into my practice I saw a posting for the Pacific Justice Institute, which is a Christian legal nonprofit that helps with religious freedom, parental rights and other civil liberties such as religious discrimination cases in the workplace. Religious freedom in the U.S. was something I was passionate about but I knew I wanted a support team with me, and they are an awesome group of attorneys that have each other’s backs and are there to collaborate. Because of my immigration background, that’s my main area that I help with. We do religious asylum cases for Christians who are persecuted in other countries who are here but are afraid to go back to their home countries. Now because the Covid 19 vaccine is a requirement to have a green card, we don’t help with that process, but there is a religious waiver for the vaccine. We will help if they have a religious objection to the vaccine and it’s preventing them from getting a green card. Another big issue that hopefully is getting better as time progresses is termination for people who did not get the vaccine. Instead of accommodating them the company would just terminate them.”

When asked about her focus in private practice she says, “That is focused on religious workers’ visas but I also work with naturalization: people who want to become citizens. I would also help with 601 waivers if a person came without inspection, has been in the U.S. for years and has a family and is threatened with deportation. In my mind it’s keeping families together. So if a father came in as a teenager to try to support his family and all these years later has gotten married and has a family of his own now, he is at risk of being deported. I know there is a lot of controversy over helping people like that but for me it’s keeping the family together. As a Christian, no one wants couples to be separated and the children to grow up without a dad. What God has put together let no man separate.”

When Whitney was on the fence about pursuing law, she asked herself the question of how being a lawyer would advance the kingdom of God. She comments, “That question solidified my direction because the reasons are endless in my mind. Every case is unique. Every pastor or religious worker that I am bringing in is going to reach people for Christ. I am a small piece of the puzzle. They may need more training here to go back to reach their country or they may be pastoring a refugee church here. That is one person who may be impacting many others. I think of a family being separated. If they have a young adolescent male, how he would be impacted going through his teens not having a dad. It affects generations if a family is separated. For the religious asylum cases, it is literally keeping someone from being killed. You read about Voice of the Martyrs and you see their eyes blacked out in the photos. It’s amazing to hear their stories when they are here and you can help them with religious asylum.”