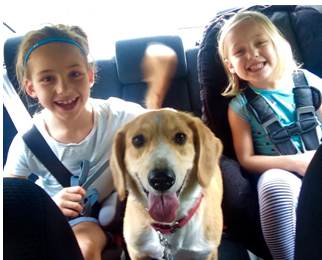 What it means to truly invest in others.

The memory of my first few weeks with Louie always brings a smile to my face! We almost didn’t have a “first few weeks together” because of his challenging behaviors, but we pressed through.

When he first came to live with me, he would roam around my house, sniffing and whining. I wondered if he needed to go outside, so I would take him out, let him do his thing, and then bring him back in. A few minutes later, he would run upstairs and then downstairs, whining. “Again?” I thought to myself. “Does he have to go out again? What’s with this dog?” He whined constantly and seemed to be searching for something, anything, familiar to him.

My visit with Louie to the vet, Dr. Paul, for his first health checkup brought some things to light. When Dr. Paul checked him, Lou whined and shook with fear, but the vet just kept going. “He’s a pretty healthy pup. Any issues that you notice?”

“Yes! He whines! Incessantly! I’ll be working in my office and Louie will be checking out my home. He’ll pop into my office, look around, whine, and go back through the house, whining, whining, constantly whining.”

“Okay,” I thought, “that’s simple enough.” Because I work from home, I made a bed for him right under my desk and blocked the stairway to the upstairs level. I kept a close watch on him and interacted with him when I was able to do so. Amazingly, his whining and desire to roam around the house stopped, and the sighs and active dreams of a happy pup filled my office.

All Louie needed was a little watchful supervision. He needed to know I was close by. He needed to understand his boundaries and just how far he could safely explore without wandering too far away or getting lost.

Isn’t this just like our teams? When they first engage with our organizations, we think we are doing them a favor by letting them “roam.” They spend their time “onboarding” or looking around for anything that looks familiar to them, which could cause frustration. Like Louie, they just need a little watchful supervision.

They need to know their leader is close by and available when needed. They need to understand what their boundaries are and that if they make a mistake, it is OK because, hopefully, the problem is easy to rectify. The time that I poured into helping Louie build trust and confidence and making him feel safe was an investment. It took some time, but the investment was worth every minute. Leader, you will never regret investing the necessary time and tools in your team to build trust and help them feel safe and to know they are valued.

As I type this chapter, I have no idea where Louie is. He’s in my house but not under my feet. In fact, he is never under my feet these days. Many times I stand by my front door, hands on my hips, loudly asking, “Is there a dog in the house?” No answer. “Any dog? Is there any dog in the house?” No answer. “Is there any dog in the house who would like to go for a walk?” With that, I hear the rumblings of four squatty little legs running to the front door from any one of his favorite places. He is either upstairs, looking out over his kingdom through the second story window, downstairs in his crate (voluntarily), or out on the deck, sunning himself. He has developed enough that he no longer needs my watchful supervision. He trusts that if anything changes, I’ll inform him. For now, he’s just fine—wherever he is!