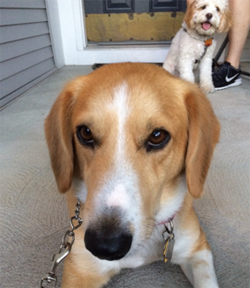 Louie has this funny little habit of whining when he sees his pals. You can hear him all the way down the street. People will turn and wait as Louie’s whines get louder and his tail wags faster. He’ll run towards the person or one of his furry friends. He excitedly greets them and then BOOM! He’s on to the next friend.

People know he’s going to do that to them. They watch him run and hear his excitement and after a few doggie sniffs he quickly moves on. My neighbors fully expect him to behave this way because they’ve witnessed this so many times. And now it’s the talk of the neighborhood…how snooty little Louie DiStasi can be.

I make excuses and justify his behavior by saying things like, “He’s very focused on his walk,” or “Don’t take it personally, he’s anxious to keep moving.” It is obvious his reputation clearly precedes him as we walk through the neighborhood.

I had the honor and pleasure to work with Ken Blanchard beginning in early 2000. During a workshop in 2001, Ken shared a memorable exercise that left an indelible imprint on my mind and heart.

Ken told a story about Swedish chemist, Alfred Bernhard Nobel, who invented dynamite in 1866 and became rich. Nobel was as interested in drama and poetry as he was in chemistry and physics, but it was in the sciences that he made his fame, and by the time of his death he held more than 350 patents and controlled factories and labs in 20 countries.

When Alfred Nobel’s brother died, a newspaper mistakenly published an obituary of Alfred that emphasized the fact that he had invented things that blew up and killed people. Nobel, not wanting to be remembered in that way, pledged his wealth toward the betterment of humanity. In his will he directed the establishment of a foundation to award annual prizes for achievement in chemistry, physics, literature, and efforts toward international peace, which is known as the Nobel Prize. This award is considered one of the most prestigious awards in the world and includes a cash prize of nearly one million dollars.

That exercise had a profound effect on me then, and still does today. I don’t want to be gone and people have to drum up something about me being a compassionate and deeply caring person. I commit to living out those characteristics today.

I encourage you to do the exercise Ken has had so many people around the world engage in doing: write your own obituary. Take time to figure out how you want to be remembered and then commit to being that person today!

As for Louie, it may be too late. It seems his reputation precedes him and not in a good way. We’ll have to continue to work on his relational skills and how he engages with others. Stay tuned!