The power of love in an unloving world 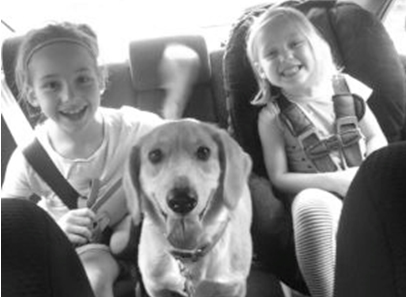 Some time ago, I overheard my oldest granddaughter, Evi, share our adopted dog Louie’s story with her younger sister, Mea. Though you may have heard this “tail” a time or two before, I thought you would enjoy this rendition:

“A long time ago, there was a little dog who was all alone in the woods. He was scared and afraid and felt very, very alone. It was nighttime and then daylight and then nighttime, again and again. Once, he saw another little animal and thought, ‘Oh, that looks like someone who could be my friend.’ But the animal was a mean cat. It hissed and clawed at the poor little dog, scratching his ear till it started to bleed. ‘My,’ said the pup. ‘I guess it doesn’t want to be my friend after all.’ The little dog still has a mark on his ear.

“The poor little dog was sad, but he kept on going because he knew somewhere, someone would love him. He was so tired that he couldn’t keep his head up. He came to a road and a woman who was driving by saw him and picked him up. She took him to a place filled with lots of people and other dogs. The people called and called and called all sorts of places to find out if anyone owned the dog. They put up signs and waited and waited, but no one came to see the little dog. He still felt all alone.

“One morning, the people put the little dog in a van and drove him far, far away. They took him to an adopt-a-pet store. There, he saw a nice lady who took him home. He was scared at first, but then the lady opened the door to her home, and two little girls were waiting for him. They hugged him and kissed his head and called him their brother. Louie finally found a place he called home and two sisters who loved him very much.”

I smiled as I heard the tale so poignantly shared. Once again, Louie’s story tugged at my heart as I thought about our little dog wandering the streets and wooded areas, not knowing where he was or where he should go. It is even sadder to think that despite the shelter’s efforts to find his family, no one came to take him home. Louie was unclaimed and unloved—a very sad state, indeed.

Since he first came to live in my home, there has been no question that he is loved. I’ve gladly claimed him as my little pal, and he truly is a brother to Evi and Mea. He knows where home is. Every time we take a walk, he’ll look up at me with those big, brown eyes, and I’ll ask, “Do you want to go home, Lou?” With a spring in his step and dogged determination, he’ll prance all the way home with little guidance from me. I have been unwavering in working through life’s tough spots to build a relationship of trust, and it has paid off in huge dividends of joy for Louie and me as well as for Evi, Mea, and many other people whom Louie has come to know and love.

Being unclaimed and unloved is not limited to adopted pups. Many people in our lives have suffered through this emotional pain. Many times, these people are close friends, teammates, bosses, or fellow board members. We never know who they are because, in today’s shallow society, we don’t take the time to learn about people’s lives. We often wonder what is wrong with individuals who act out, but in many cases, these people may be unclaimed and unloved and are looking for others they can trust. Don’t be like the cat in Louie’s tale and lash out at them.

Before passing judgment on others, take the time to learn their stories. People are fascinating, and everyone has a unique history. Once you learn about someone and take the time to get to know them, you’ll see them blossom and grow. Learning about others is imperative to help our team build trust and learn to walk in their strengths. Be the leader who is unwavering in working through tough spots to build a relationship of trust. This effort will pay off in huge dividends of joy and—believe it or not—productivity.

As you read this blog I want you to know you are not unclaimed or unloved, no matter what has happened to you in your past. God is unwavering in His love for us. It is up to us to joyfully accept and receive such love.

As for Louie—he has taught me so much about love and determination. I am never without a lesson from this little chap. He has also opened my eyes to that fact that my sweet Evi is carrying on the Nonna tradition of being the “best story maker” ever.