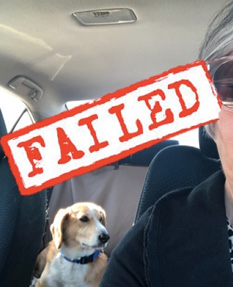 Since adopting my rescue pup, Louie, in 2013, he and I have experienced many challenges as well as delightful adventures. Every interaction has given me PAWS to reflect on the leadership lessons I’ve learned over the years, many of which I’ve shared in our book, Lead Like Louie.

One thing is certain: Louie loves people! He loves children, is kind to seniors, and is drawn to individuals with disabilities. Because of his personality, I registered Louie for the Dog Visitation Program at Cincinnati Children’s Hospital. Louie would need a behavioral evaluation, and the hospital offered these evaluations only once a year, usually in January or February. We were on the waiting list for well over a year.

Finally, we received an email inviting Louie to be evaluated. I was very excited, and knew Louie would be a shining star. The eagerly anticipated day arrived. I parked the car and we walked in, heads held high. Louie immediately engaged with the assessment team . . . and then BAM. He turned from the team and was much more interested in the smells on the floor, the hallway that led anywhere other than where he currently was, and the doorway that led him back outside. The team loved him and desperately tried to engage him, but he was not interested—at all.

Needless to say, the team was disappointed and wanted to give Louie another try. We scheduled a follow-up visit for the following Saturday to see if he would engage more. I snapped this picture of Louie before I pulled out of the parking lot to drive home. Louie failed. And by the looks of it, he couldn’t care less.

Over the next few days, I pondered Louie’s unusual behavior. Why didn’t he engage? I’d watched him come alive in nursing homes, engaging with residents who are looking for someone to talk to. When we visit schools, he engages with every child he sees and stays engaged. I’ve taken him many times to see clients, and he loves popping into various offices.

Then it dawned on me. Louie is not drawn to hospitals, even if they have children. I wanted to focus on why Louie failed the assessment when Louie made it clear as we drove home: volunteering at a hospital is not his calling. Many times we get so focused on our failings that we neglect to see the true direction of our calling or the calling of those we lead.

This happened to me when I was very young, but I didn’t understand the lesson until forty years later. When my mother passed, she left each of her six children a treasure chest of personal belongings that she cherished over the years. In my treasure chest, I found a letter that I believe she kept so that someday, I would recognize my true calling. The letter was from a publisher in response to a query I had sent. They informed me that they did not have room in their publication that month for the poem I submitted. They went on to say that if I was interested in being a regular contributor to the publication to please contact them.

I never contacted them. I was fifteen years old when I sent that poem and received my very first rejection letter. As I read the letter many years later, I realized why I had not contacted them. I did not get past the first line of rejection. That rejection letter had nothing to do with my skillset, but I did not press through to find my true calling until several years later.

I contacted the hospital assessment team to let them know Louie would not be returning. He’s not meant to be a hospital therapy dog. That does not mean he’s not called to visit people, we’ve just redirected the path a bit. He shines when he enters the corridors of a school or a business, and hearts are lifted because of a little rescue pup named Louie. If you’re someone who loves others, inspire them to see past rejection or failure to what it is they are truly called to do.