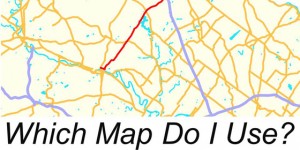 Back in the “old days” when traveling, motorists entered into an occasionally futile exercise of wrestling with an immense piece of paper that was folded in what appeared to be an impossible combination of ways that explained a short route between two geographic locations. This paper became the source of many domestic disagreements of various complexities, revealing the often cloaked capacity of one gender’s confidence in navigation. It is futile to calculate the amounts of unnecessarily consumed fuel during these paths into the unknown, valiantly searching for the familiar sights in our memory banks.

The metaphor goes way beyond a map focused strictly on a piece of physical pavement between two places on a map. For instance:

1) A good friend of mine, Don Talbert, is a “money cartographer.” So you question what in the world that is. Don is a financial authority whose counsel has guided many clients in their investments, spending habits, and long term goals. His experience directs his recommendations because he knows the “territory”, and doesn’t want their fiduciary decisions to get off the road into the weeds of poverty, suffering, or bankruptcy.

2) In my engineering management experience, I have used a “fishbone chart” to bring manufacturing focus in to cause and effect contributions in the process of completing a product with efficiency and cost benefit. It is a “map” of how to get from unproductive or disruptive components of a company’s operation to reduce cost, reduce risk, build profitably, and increase customer satisfaction. This is a directional pointer to the right direction for success.

3) In our often crazy work world, we see so many who have lost their way. They try to “fix” things in their businesses and home lives by consulting with errant resources, when the Bible is right there as a guide. It has an inexhaustible supply of tips, rules, recommendations, commandments, and counsel as a map to spiritual contentment, financial accountability, employee / employer relationships, philanthropic goals, and customer evidence of dependability, integrity, and loyalty. And it is our jobs as workplace missionaries to exhibit that character, that intensity, that transparency, and that evidence of Christian foundational columns of faith. So many at our elbows every day need to be shown the Biblical map in practice while on our own Road to Revival.

The plan for our lives can be occasionally buried in the fog ahead. That’s OK. But when we stay on HIS road, watching HIS hand point the way, we will be just fine. Because unlike a paper map, many times the road God wants us on is not a nice straight line between two places…

Lord, so many of us get caught up reading our own “maps” to find our way. Forgive us for thinking we where we’re going with our personal level of confidence. Let’s use YOUR way down our paths through this life. In Christ’s Name. Amen.”